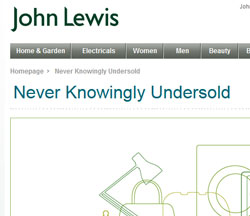 The John Lewis Partnership is a British retail institution. Founded in 1929 as a company owned by its employees, known as ‘partners’, today the chain of department stores shows us how to survive at a time when other retailers like JJB Sports, Jessops, HMV and Woolworths have all gone bust. What have John Lewis done differently and what can local independent stores learn from this?

For years, John Lewis was famous for its promise to be “Never Knowingly Undersold”, a claim that, as the Guardian explains, is not as strong today as it used to be. The reason is cutthroat competition from Internet retailers forcing margins downward and John Lewis deciding that they simply weren’t going to play that game. The store has included extended warranties in their price for some time, however now the company will only match prices and issue differential refunds when the offering from another local retailer – with a physical location – has a matching warranty.  The price-match rarely happens because John Lewis tends to offer longer warranties than their competitors.

The decision by John Lewis to water down their low price guarantee with their revised T&Cs hasn’t affected their ability to make money while other high street names are going to the wall. The group’s year-on-year figures for the week to February 2nd 2013 show that sales overall are up 20.6% and their Tamworth store saw an increase of  36.4%. While some businesses have disappeared after desperately trying to reinvent themselves to stay relevant in the internet age, John Lewis has been raking it in.

The Secret’s in the Service

The secret for John Lewis’s success is obvious to its customers – the service. John Lewis department stores distinguish themselves by having salespeople who actually know about the products they’re selling and make the shopping experience a pleasure. Of course it helps that the stores only carry products that they have tested to ensure that their customers will be satisfied with them.

The horror stories that you often hear about how high street retailers dump all over their customers are hard to find for John Lewis. They just seem to know how to look after their customers.

Perhaps the joint ownership of all the partners, who also deal with their customers face-to-face every day, has something to do with it. They take pride in what they do, knowing that looking after valued customers will reward them with continued employment and a bonus in their pay check.

The department store group has built a loyal following over the years. Regular customers who need to purchase televisions or fridge freezers will often go straight to John Lewis and make a purchase on the spot, without even thinking of comparing prices. My own mother purchased a new washing machine from John Lewis over the phone, without seeing the model in person until it was delivered. She knew it was almost impossible for it to be a bad buying decision.

The John Lewis Partnership knows what its customers want – peace of mind:

How else can you explain people paying up to  10% or 20% more than they need to for a product with an inclusive three or five year warranty?

The firm hasn’t been challenged by online shopping. Far from it, in fact. Their online sales for the first week of January were up 48.5% on 2011. John Lewis customers are not so price sensitive. They know where they want to spend their money, even if its not the cheapest possible price.

Being on first-name friendly terms with your local customers is not, apparently, a sufficient reason to keep them coming into your store if there are cheaper alternatives. Local independent shopkeepers are struggling to build the same customer loyalty that John Lewis has, in order to keep their doors open as supermarkets challenge them on their doorstep with new ‘local’ outlets.

As supermarkets try to drive down costs by employing minimum wage workers and self-service checkouts, independent retailers should focus on how best to help their customers and give them peace of mind. Local shops can be memorable for being more helpful than their big-box competitors, both with service and with knowledge. John Lewis has shown that customers will pay a premium for it.